Hillary Hanson is the Director of Population Health Services and the Deputy Health Officer for RiverStone Health, the local health department in Yellowstone County, Montana.

She oversees various health promotion, disease prevention, and emergency preparedness programs. Ms. Hanson received her M.S. in applied statistics from the Purdue University and an M.P.H. in public health leadership from the University of North Carolina. She currently serves as president of the Montana Public Health Association, and has also served on the local Safe Routes to School Steering Committee, the Exchange Club, and as co-chair of Healthy By Design Yellowstone. Hillary has dedicated considerable time over the last five years to advance the development and use of trails in Yellowstone County, Montana and in support of active transportation throughout the state of Montana.

Hillary’s work began as her role in the public health department and as a leader in the community health coalition, included a community health assessment (CHA) in 2005 which used national (Healthy People 2010) and state benchmarks to identify opportunities for community health improvement. While no single health issue emerged as critical, the CHA identified heart disease, unintentional injury, physical activity, mental health, and nutrition as areas that warranted improvement. The community concluded that a plan focused on a Healthy Places Initiative could help improve several indicators in the population’s health, including those identified in the CHA.

The CDC defines healthy places as “those designed and built to improve the quality of life for all people who live, work, worship, learn, and play within their borders – where every person is free to make choices amid a variety of healthy, available, accessible, and affordable options.” Similarly, the intent is to deliberately influence community projects and activities to increase the accessibility of healthy lifestyle choices.

Hillary played a lead role in securing a Robert Wood Johnson Foundation grant for the community to learn and practice Health Impact Assessment (HIA). It is defined as “a combination of procedures, methods and tools by which a policy, program or project may be judged as to its potential effects on the health of a population, and the effects within the population.” The purpose of HIA is to infuse health as a criterion for decision-making into community projects and plans, before the project or plan is implemented. In doing so, HIA becomes a tool directly in line with advocacy and encouragement for policies, programs or projects that are healthy by design. 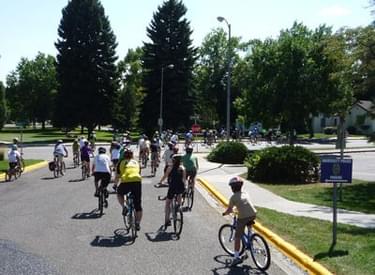 Transportation is a key component in the design of a community. How and where roads are built play a decisive role in how people move around in the system. If there are no accommodations for biking and walking safely, people are not as likely to engage in those activities; thus, playing into a more sedentary lifestyle that relates directly to chronic health issues, such as, obesity, diabetes, heart disease and depression. In 2008 Hillary led a Health Impact Assessment on the Billings’ Area Growth Policy which found significant opportunity to infuse health considerations in the planning for city development. The work resulted in the addition of a full chapter on health in this critical planning document and the foundation for health to be a key consideration in future updates to the document.

Hillary’s work continued in securing a grant from the CDC’s Healthy Communities ACHIEVE program through the National Association of City and County Health Officials in 2009. The grant supported development of a goal to pass a complete streets policy for the City of Billings, MT. Capitalizing on the Billings Area Chamber of Commerce’s new branding campaign touting the area as “Montana’s Trailhead” Hillary lead efforts to plan a “Trailhead to Health Forum” bringing together key stakeholders representing health care, city planning, economic development, public transit, education, law enforcement, private business development and policy makers to propel work toward enhancing the trail system through stronger interconnection. From the forum emerged a shard vision for an interconnected trail system, commitments of time to develop a complete streets policy for the city and the promise of a few city council representatives to see the plan through adoption. A subsequent community campaign was launched with Hillary taking the lead on many community presentations to build support for the initiative and despite political obstacles, the complete streets policy passed in Billings in 2011.

Hillary’s work was recognized by ACHIEVE again when she was selected to serve as a mentor to the community of Great Falls, Montana in their efforts to pass a similar policy. Hillary has offered support and mentoring to other Montana communities for their active transportation development as has included it as part of the state public health association agenda; however, the spread of her work does not end at the state line. She has presented the work of advancing trail development and complete streets at a variety of national conferences and webinars including CDC’s Health Communities’ ACHIEVE program, Catholic Health Association, HRSA’s Healthy Weight Collaborative, the CDC’s Office for State, Tribal, Local and Territorial Support, and for the Alabama Department of Public Health.

Hillary’s work is not done. She actively chairs a task force of Healthy By Design focused on implementation of the policy and development of a benchmark report to help identify and quantify how the current infrastructure of trails, bike lanes and sidewalks is being used. The work has already included bicycle and pedestrian counts at several intersections and as infrastructure is developed, additional data will be collected to document the impact of the efforts. Additional efforts on the horizon include the launch of a local media campaign to promote safety for bicyclists, pedestrians, and motorists.