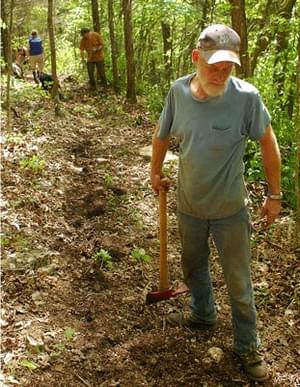 Russell Martin has provided consistent and versatile service to the Ozark Trail Association (OTA) and to the state of Missouri on behalf of multi-use trails.

As an avid horseman and chairman of Show-Me Missouri Backcountry Horsemen, the OTA particularly appreciates Martin’s dedication to building and maintaining multi-use trails that are shared by hikers, cyclists and horseback riders.

He’s a wonderful advocate for the Ozark Trail, a friend to all its users and has contributed greatly to trail planning, development and maintenance.

Martin has many roles within the OTA including Director on the Board of Directors, U.S. Forest Service-certified sawyer, crew leader and trail adopter. His tenure on the Board began in January 2012 and will extend until 2015. As a board member Martin’s duties include meeting quarterly to help establish OTA goals and direction, and participating in subcommittees to consider and recommend specific board actions including hiring and program decisions.

As a certified sawyer, Martin’s contributions are invaluable to the organization. He not only spends multiple hours sawing and removing deadfall and brush from the trail, he also recruits friends to assist him. After damaging storms hit the trail, Russell is often the first to begin the job of clearing the corridor.

In August 2012, Martin completed the OTA’s two-day training for crew leaders. At an upcoming Mega Event he will lead volunteers in trail building including organizing crew members and transporting them to the work site, demonstrating safe use of tools, training new volunteers on trail building technique, coordinating safety equipment and procedures and bringing his crew to the take-out point at the conclusion of the day’s work.

Martin has taken the lead on behalf of SMMBCH in participating in the OTA’s Adopt-A-Trail Program. His group maintains a stretch of more than seven miles on the Karkaghne section of the Ozark Trail, located in the Mark Twain National Forest. For the award period, Martin contributed 217.5 hours of work on his adopted portion of the trail. Overall, during the award period, Martin has contributed 143 logged hours for chain-sawing, construction and maintenance activities and meetings, across a total of 11 events. In combination with his Adopt-A-Trail work, Martin has contributed a grand total of 360.5 hours in development of the Ozark Trail between June 1, 2010 and September 30, 2012.

The Ozark Trail Association, a non-profit corporation in Missouri has the mission to develop, maintain, preserve, promote, and protect the rugged natural beauty of the Ozark Trail. The organization consists of dedicated volunteers who plan, build, maintain, and expand the Ozark Trail, a total of over 360 miles of multi-use trail extending from Onondaga State Park in central Missouri south toward the Arkansas border.