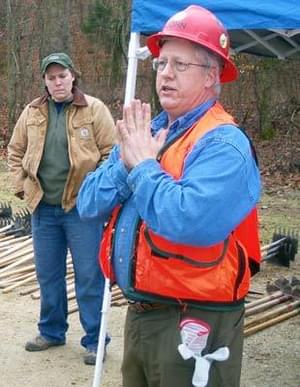 John C. Roth was a person who built connections and moved dreams forward.

The history of the Ozark Trail goes back to 1977, when John Roth was just turning 18. The Ozark Trail emerged from a vision in the late 1970s to build a scenic and varied route in the Missouri Ozarks, from just outside St. Louis running southwest to the Arkansas border, eventually connecting with the Ozark Highlands Trail to create a 700-mile through-trail. In just under a decade, 170-plus miles of natural-surface trail were constructed through the oversight of the Ozark Trail Council, a collaboration of public land managers, private landowners, and trail user groups.

Still, huge gaps in the trail remained; few people knew about it, public land agencies didn't have money or staff to maintain it and no one was organizing volunteers to finish the trail. John C. Roth was a person who built connections and moved dreams forward. A lifelong outdoorsman with an abiding love for the Missouri Ozarks, John developed a successful technology consulting firm and shared the profits of its sale with employees in 1998. After a hike on the Ozark Trail, he complained to the U.S. Forest Service about its overgrown condition. with the suggestion that he come and help repair the trail, John took a crucial step and appeared at the Federal Forestry Service office the next day, ready to dig in. "John didn't know anything about the outdoors, trails or machinery," Paul Nazarenko said in a 2006 interview. "He’s taken the Ozark Trail out of the Dark Ages."

After further evaluating the condition of the Ozark Trail, John coordinated a pitch to the Ozark Trail Council in 2001. His vision was to position the trail as a lasting resource for generations and supply a missing link; an enthusiastic volunteer organization to build and maintain the Ozark Trail. In 2002, John co-founded the non for profit Ozark Trail Association (OTA) with the mission to develop, maintain, preserve, promote and protect the rugged natural beauty of the Ozark Trail.

John not only was the organization’s first president, but became the trail guru and chief organizer for the group and contributed an average of 1,500 hours a year to his passion. John’s vision was to repair and expand the Ozark Trail so that it might one day rival in popularity of the Appalachian Trail, the nation’s longest marked footpath. With John out in front, the trail and the organization he founded began to flourish as new miles were constructed.

Along the way John carved out a reputation for asking tough questions, cultivating relationships with agencies that included the U.S. Forestry Service, The National Park Service, Missouri’s Department of Natural Resources and Department of Conservation along with various private land owners and forging those partnerships to benefit the Ozark Trail. At the same time OTA volunteers trained by John were repairing, maintaining, and constructing new segments of trail. By November 2005, truly a strategic success, the Middle Fork section was completed; 28 miles of beautiful trail in the upper basin of the Black River. That section closed a longstanding gap in southern Missouri’s scenic Mark Twain National Forest and creating over 225 miles of through-trail through the Missouri Ozarks, the Ozark Trail was a true long distance trail at last.

Enter the art of technology. For decades, the Ozark Trail was represented by a map, a brochure, an occasional news article and maybe vague advice from a friend. It was an insider’s story, shared by a select group of adventurers and a few wandering souls who stumbled upon the trail. Due to John’s extensive computer background, he also helped to develop and create the Ozark Trail Association’s web site which became the de-facto source of Ozark Trail information. Collaborating with another volunteer, John would regularly update the OTA's web site to provide up-to-date information about trail conditions and answering the multitude of questions concerning the Ozark Trail.

Shepherded by Roth, the OTA was also growing to include a multitude of volunteers ranging in age from two to eighty. They were empty nesters, college students, singles, and families with kids and dogs. All volunteering for a day or a weekend of hard work, shared meals, a feeling of community, and sense of accomplishment that some describe as a “runner's high.” Successes over the past several years include weekend family-oriented “Mega Events” for trail building, one day construction and maintenance outings, the development of a successful Adopt-A-Trail program for ongoing maintenance, and volunteer recognition which includes the coveted “Red Jacket” award to which John’s involvement was instrumental.

In 2005, the upper reservoir of the Taum Sauk pumped storage plant failed causing a flood that devastated Missouri’s Johnson Shut-ins State Park and destroyed a part of the Taum Sauk Ozark Trail section. John worked closely with Missouri’s DNR in getting a Memorandum of Understanding in place and when it was granted, from the first day of January to the first day of May of 2009, John along with OTA volunteers logged more trail construction and maintenance hours than all of the previous year of 2008. The result was a new 2 mile Scour Trail connecting to the Ozark Trail and a new re-route section high above the shut-ins as well as the continuing construction and maintenance along the rest of the OT.

The celebration was short lived as on Friday, May 8, 2009, an unusually strong windstorm devastated over 44 miles of the OT just within the Mark Twain National Forest and all or parts of several sections of the OT were closed because of downed trees, not just a few but hundreds per mile that blocked the trail. John was out the next day sawing on the newly constructed Scour Trail with other OTA volunteer sawyers. In the days after John spent countless hours evaluating and accessing the damage done not only to the trail from trees blown over and on to the trail but also the many holes in the tread caused by the roots of fallen trees having been torn out of the ground and OT trail markers that were lost due to the damage. John again worked closely with federal and state agencies to find what resources could be used to reopen the OT.

Statistics for what John achieved volunteering for the Ozark Trail Association is one that could probably be doubled and not be close to what John accomplished: 254 events (18 Mega Events) and John was the crew leader/coordinator for most of them. The initial conception of the “Mega Events” went from 17 people in September 2003 to 185 in April 2009. Collectively the amount of hours volunteered by John in the 5 ½ years since he started the OTA is staggering. A total of 1,246 different people have attended events and it is believed that John met every single one.

John hoped to eventually see the trail grow from the Ozarks to Arkansas. Then on July 3, 2009, John died in a tragic accident on his farm near Steeleville, Missouri. After his death the Ozark Trail Association Board of Directors voted unanimously to designate the Middle Fork section of the Ozark Trail, the section that started it all, in John’s honor as “The John Roth Memorial Section of the Middle Fork.” John’s legacy, the expansion of the Ozark Trail from an overgrown, unmarked path to nearly 360 miles of well-maintained multi-use trail through the beautiful Missouri Ozarks is still being honored today. In addition, John created a crossroads by joining lives and making connections. John’s passion for the Ozark Trail is being carried on by the volunteers who are still under his spell, “He was a “Pied Piper of people” with trail building tools as his flute!” remarked one of the OTA volunteers.

Today, the Ozark Trail begins at Missouri’s Onondaga Cave State Park near Leasburg, Missouri and has about 360 miles of mostly wooded, back-country routes. Volunteers for the trail operate out of a home donated by the U. S. Forest Service in Potosi, Missouri.