Trail Inventory Database for all trails in the state park system

Missouri, best known as the “Show-Me State” and “Gateway to the West,” is home to an extensive trail system that allows users to explore the varied natural landscapes of the state.

Missouri’s comprehensive recreational trail system, maintained by federal, state and local agencies as well as private organizations, offers trails for all users, including hikers, backpackers, bicyclists, equestrians, paddlers and off-road vehicle riders. Missouri recognizes that trails are an important component of an outstanding and strong state, and vital for recreation and health, to connect people with nature, and to protect and manage Missouri’s natural resources. A leader in this trail effort is Missouri State Parks, which offers almost 1,000 miles of managed trails and 2,900 acres of motorized riding areas in 87 state parks and historic sites. Missouri State Parks has been recognized as one of America’s best state park systems as a finalist in the 2011 National Gold Medal Award for Excellence in Parks and Recreation Administration. Missouri is also home to many other state and federal agencies that maintain trails, including the National Park Service; U.S. Fish and Wildlife Service; U.S. Army Corps of Engineers; U.S. Forest Service, which manages 700 miles of trail through Mark Twain National Forest; and the Missouri Department of Conservation, which manages 600 miles of trail in over 800,000 acres of conservation areas. A multi-agency effort, led by Missouri State Parks and the Ozark Trail Association, manages the 240-mile Ozark Trail that crosses some of Missouri’s most dramatic landscapes. Additionally, there are thousands of trail miles maintained by various municipalities, local park districts, schools, colleges, churches, private entities, not for profit groups, and other local groups throughout the state. Missouri also offers over 500 miles of designated National Recreation Trails.

Missouri includes numerous significant trails. Lewis and Clark, Trail of Tears and the Santa Fe National Historic Trails pass through Missouri and the Pony Express, California, and Oregon National Historic Trails begin on its western border. Other nationally significant trails include the Mississippi River Trail, TransAmerica Bicycle Trail, Henry Rowe Schoolcraft Route, Historic Route 66, and Katy Trail, the longest developed rail-trail in the nation. As the “Gateway to the West,” the state offers historic places like Westport and Arrow Rock, and pioneers such as Daniel Boone and Kit Carson began their trail adventures in Missouri. 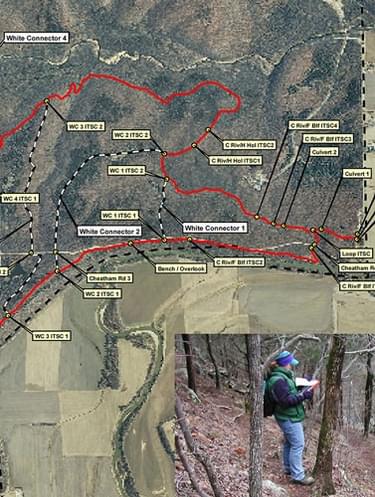 An example of a map in the State Park Trail Inventory

Missouri’s trail system would not be possible without the financial commitment and support of agencies and the public. In addition to using its regular funding, Missouri State Parks has been successful in using federal Recreational Trails Program and Land and Water Conservation Fund grants to build and maintain award-winning trails. They have enhanced this effort with assistance from the State Parks Youth Corps, recognizing the value of recreation in economic recovery by putting young people to work in state parks to build and maintain trails.

An important aspect of Missouri’s trail system is user involvement. All Missouri state and federal managers depend on passionate and dynamic volunteers to assist with all aspects of trail management. One major contributor is the Ozark Trail Association, which sets an example nationwide through membership, mega work events, and their organized approach to trails and trail education. The OTA provides trail building, maintenance and training to other groups and agencies.

The Show-Me Missouri Back Country Horsemen is another example of a successful volunteer group improving Missouri trails. They often provide sawyers and other aid to many parks, agencies and groups throughout the state. SMMBCH also takes the lead in teaching Leave No Trace training courses and Missouri State Parks is a proud partner in this outdoor ethics program. The Missouri Bicycle and Pedestrian Federation is a statewide, not-for-profit, organization that promotes bicycle and pedestrian access, safety and education in Missouri. The Great Rivers Greenway District in St. Louis works for a clean, green and more connected metropolitan area by spearheading the development of The River Ring, an interconnected system of greenways, parks and trails that will encircle the St. Louis region, enhancing the quality of life for residents and visitors. These are just some examples of successful groups that have come together to contribute their various skills and knowledge toward a greater, overall state vision. Trail managers in Missouri understand the importance of pooling their resources together for the betterment of the trail system as a whole.

Missouri is doing more than building trails. It is looking to the future to use technology to improve trail management and enhance the trail experience for all users. Missouri State Parks is leading that effort with the creation of a cutting-edge Trail Inventory Database for all trails in the state park system. The detail of the criteria and its user friendly format allows for more consistent management in planning, signing, maintaining and mapping of more than 230 trails.

The State Park Trail Inventory Database is also being used to update connecting trail systems throughout Missouri and to create a future tool for users– the proposed Missouri Trail Website. The statewide effort to consolidate and coordinate trail data is being led by the Missouri Trail Alliance, a group of park and trail managers as well as trail enthusiasts from across the state. Currently chaired by the Missouri Parks and Recreation Association, the group includes representatives from Missouri State Parks, Missouri Division of Tourism, regional trail agencies such as the Springfield-Greene County Park Board, Great Rivers Greenway District, and local agencies such as Kansas City Parks and Recreation, St. Louis County Parks, Jefferson City Parks and Recreation Department and Columbia Parks and Recreation. The group’s primary objective is to establish a comprehensive and consistent statewide trail information sharing system via the proposed Missouri Trail Website. After having completed an internal trail inventory database, Missouri State Parks made the first step in the collection of statewide trail data by including a trail component during the update of the Statewide Comprehensive Outdoor Recreation Plan. This information was provided to the MTA and is the foundation for the planned online trail mapping website. The MTA has been working to create a merged database with trail maps that will be combined with information from the Division of Tourism. This information will further enhance the Missouri trail mapping website and provide Missourians and tourists from around the country with additional trip planning assistance along Missouri’s trails.

With its varied and dramatic landscapes and comprehensive trail system, Missouri is already a destination for trail users from around the United States. But Missouri is not content to rest on past accomplishments. Through current and future partnerships at the federal, state and local levels, Missouri continues to build on its statewide trail network and improve its trail system through master planning, funding and program implementation. As it strengthens its trail system, Missouri also moves forward with implementing innovative projects such as the state park trail database and statewide trail website that will assist trail users. By building on the strengths of today and developing innovations for tomorrow, Missouri will ensure that it remains the Best Trail State in the nation.