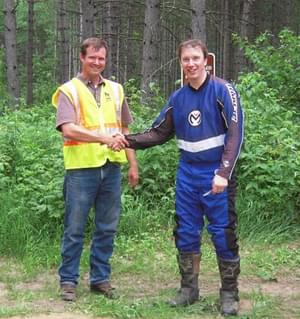 Jeff Klein has been an active member of a motorized recreation club since he was a child, working on trails with his father.

Since moving to Minnesota over 10 years ago, Jeff has been an active member of the Twin Cities Trail Riders (TCTR) Off-Highway Motorcycle Club. TCTR is a non-competition OHM club whose mission is to promote and expand OHM riding in MN.

TCTR worked with the MN Department of Natural Resources to take over the maintenance of the Huntersville Trail System. They were awarded the grant for the east side of the forest covering ~24 miles in late 2009. Jeff stepped forward to be the Grant-In-Aid (GIA) coordinator for the club.

During the past 2 years, Jeff has organized workers and work days, as well as contributed countless hours to the improvement of the Huntersville trail system, which is over a 3 hour drive from his residence. The work that has been accomplished during that time includes paving driveway crossings of the residents whose driveways cross a portion of the trail system which runs along a ditch; working with a local forest company to route a section of trail around a wetland area; working with the township to provide access of the trail system into the town for services; adding hundreds of intersection and marker signs; working with the DNR to re-route the trails around and through areas being harvested; added two trailheads and parking lots; and keeping the trail clear of down trees, brush, etc.

Also during this time, Jeff worked with the DNR to pick up the maintenance for the west section of the trail system, adding another 29 miles of trails which the club, under Jeff’s guidance, will sign and maintain. The west side was awarded to the club in October of 2012.

Without Jeff’s efforts and attention, much of the items accomplished would be left undone. Huntersville State Forest is attracting additional forest users to the trail system since riders feel comfortable on the trails instead of feeling lost due to lack of signing. Areas that were sensitive have been routed around making the forest healthier. And the township and the residents are happier that their town is getting tourists and their property is not being damaged.