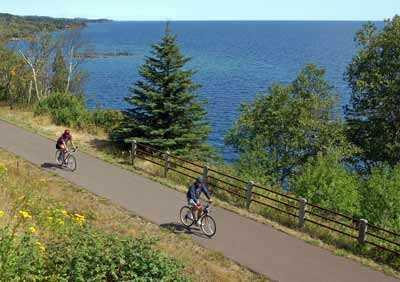 Minnesota Department of Natural Resources will spend $35 million dollars on trails over the next year.

Partnerships with trail support groups are the cornerstone of this successful trails system, along with legislative support, proactive trail providers, and recognition for tourism potential.

Minnesotans love their trails! And it’s a year-around affair with thousands of miles of the best quality recreational trails in the country, including opportunities for biking, hiking, snowmobiling, skiing, off-road-vehicle riding, horseback riding, mountain biking, in-line skating, canoeing/kayaking, and more.

Active partnerships with trail support groups are the cornerstone of this successful trails system, along with legislative support, proactive trail providers, and recognition for tourism potential.

STATE TRAILS: Minnesota was one of the first states to establish a rails-to-trails system starting in the late 1960’s. Today, the legislatively authorized State Trails system includes 1,266 off-road trail miles, of which over 590 miles are paved for bicycling and other uses. There are 785 miles of natural surface miles (including 110 miles of dual treadway along the paved trails), that are used primarily for snowmobiling, horseback riding, hiking, and mountain biking. The MN legislature has authorized over 2,600 miles of off-road trails in the State Trail system! A recent study found that over the past 10 years, the MN legislature has added about 60 new miles of State Trail each year, and the Minnesota Department of Natural Resources (MN DNR) has developed an average of 26 new miles of paved trail each year.

Minnesota is a bicycling leader, with the following accomplishments

in 2010: Bicycling Magazine named Minneapolis the #1 bicycling city in the U. S. (May, 2010); Minnesota ranked the 4th Most “Bicycle Friendly State “in the U.S. by the League of American Cyclists (May, 2010); Minnesota hosted a Bicycle Tourism Conference in April, 2010, that drew over 150 participants. The State Trail system is an integral part of bicycling opportunities in Minnesota.

SNOWMOBILE and SKI TRAILS: Minnesota has over 22,000 miles of snowmobile trails throughout the state. Over 21,000 of these miles are maintained by local snowmobile club volunteers with assistance from the State’s Grant-in-Aid program, which provides over $8 million per year in funding assistance. Minnesota’s snowmobile program began in 1973, and has been strongly supported and developed by grass roots efforts. Minnesota’s snowmobile trail system is the largest in the nation, and over 342,000 citizens snowmobile each year. Minnesota also has over 2,000 miles of cross-country ski trails, 700 of which are part of the cross-country ski grant-in-aid program and maintained by local ski clubs. Since 1984, Minnesota has had a state cross-country ski pass, which has helped maintain and groom ski trails. MINNESOTA HAS OVER 22,000 MILES OF SNOWMOBILE TRAILS

OFF-HIGHWAY VEHICLE TRAILS: Minnesota’s off&dash;highway vehicle (OHV) program dates back to the late 1970’s. The program currently manages over 1,000 miles of OHV trails within State Forests and over 1,300 miles in a grant-in-aid (GIA) trail system. The program also operates the Iron Range OHV Recreation area which includes a wide range of OHV activities (2,704 acres were added to this area over the past two years). The MN DNR supplies grants-in-aid to local units of government to administer OHV trails. In 1984, the All Terrain Vehicle (ATV) GIA Program began, and the Off highway Motorcycle (OHM) GIA Program began in the mid-1990’s. Over the past two years, a major effort to classify State Forest lands, including the designation of motorized roads and trails for OHV use was completed.

HORSE TRAILS: Minnesota’s horse trail system includes over 1,000 miles of equestrian trails in State Parks, State Trails and State Forests. Since 2007, a horse trail pass has been required in these areas, generating about $120,000 each year for equestrian projects. The MN DNR works closely with an Equestrian Advisory Group to implement the pass and related projects.

WATER TRAILS: The MN DNR manages about 4,400 miles and 1,500 facilities in the nation's largest Water Trails system, which started in 1963. Thirty-one rivers and the North Shore of Lake Superior are managed for canoeing, kayaking, boating and camping. Each year, tens of thousands of water trail guides (maps of routes, public accesses, free campsites, and navigational features) are provided free of charge. You can find these water trail guides on the Water Trails website, which received the 2009 American Trails Award for Best State Agency Trails Website.

STATE PARK, STATE FOREST, CITY, COUNTY, and REGIONAL TRAILS: State Parks and State Forests include hundreds of miles of non- motorized trails for a variety of uses and over 1,000 miles of motorized trails. Most of the trails described in this nomination are managed by the State of Minnesota through the MN DNR. In addition, there are thousands of high quality recreational trail miles managed by cities, counties, and special districts. Examples include the Metropolitan Parks and Open Space System, the Cannon Valley Trail , and the Mesabi Trail.

2008 LEGACY ACT and PLANNING ALL STATE AND REGIONAL TRAILS FOR THE NEXT 25 YEARS: In 2008, Minnesotans passed the Clean Water, Land, and Legacy Act; 14.25% of funds generated from the 3/8% increase in Minnesota sales tax will provide funding for regional and state parks and trails. The MN DNR is leading a planning effort to determine how to best utilize the legacy funds over the next 25 years, and just completed conducting public workshops statewide. Over the next year, about $35 million in legacy funding will be available to Minnesota Parks and Trails.

RELATIONSHIP WITH USER GROUPS: The MN DNR works regularly with trail user groups in the determination of policy, funding, and legislative initiatives. The MN Recreational Trail Users Association (MRTUA) serves as the advisory committee for the Recreational Trail Program, and is made up of leaders across recreation groups, such as representatives from ATV users, snowmobilers, off-highway motorcyclists, off-road vehicle users (trucks), cross-country skiers, in-line skaters, bicyclists, mountain bicyclists, equestrians, and hikers. In June, 2009, MRTUA received a national award from the Coalition for Recreational Trails for Best Trail Advisory Committee. The DNR also works directly with other statewide groups, such as the MN United Snowmobilers Association, the ATV Association of MN, the Amateur Riders Motorcycling Association, the MN 4-Wheel Drive Association, the MN Nordic Ski Association, the MN Trail Riders Association (equestrian), the MN off-Road Cyclists (Mountain Bicyclists), the Superior Hiking Trail Association, and the North Country Trail Association, along with many other local trail users groups, such as local snowmobile, ATV, and cross-country ski clubs. The DNR has also established several formal advisory committees, such as the MN Snowmobile Advisory Committee, the Equestrian Advisory Group, and the MN Motorized Trail Committee. Trail users are instrumental in the process of managing Minnesota’s extensive recreational trail opportunities, and the Minnesota DNR is proud of our strong relationship and consultation with trail users.