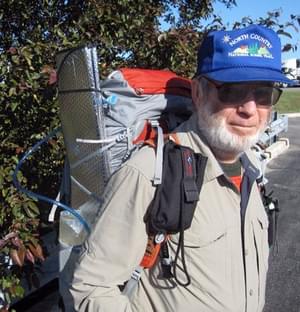 Ed Morse began his North Country National Scenic Trail experience with the Spirit of the Woods Chapter in northern Michigan participating in hikes and trail work under the leadership of Joan Young.

As he became more familiar with this chapter's more than 100 miles of trail, he observed that by early summer it was over-grown with ferns and grass. Inquiring with the chapter about this problem, he was told that they had a brush mower but no operator.

Ed became its first operator and mowed for 3 years when 2 others came on board. In the succession of years that followed, he became the assistant to Ed Chapel in the following activities: scouting, planning, transporting materials for several bridges east of High Bridge, building a puncheon through half of Leitch Bayou and an extension through a swampy area with turnout and benches. He also built a bridge over Eddington Creek.

Chapel and Ed planned, measured and staked out a series of boardwalks for Sherling Marsh which took 3 years to complete and is just short of a half mile in length. The picture was in North Star. During this time there were many small projects such as blazing, setting sign posts and cutting downed trees. From 2001 to 2009 he worked on every project of this chapter.

In 2006, Ed Morse joined up with the Grand Traverse Chapter now having the distinction of membership in 2 chapters. Retirement has enabled him to enjoy the love of his life scouting for new reroutes, working on the NCT. 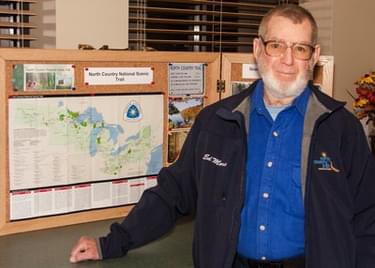 With the Grand Traverse Chapter, he has done much of the same work; scouting for new reroutes, working with our trail crew building the new Hodenply 10 mile reroute with its long 50 foot bridge, and multiple scouting expeditions with Dick Naperala, the Field Trails Coordinator.

Ed won one of three Trail Builder of the Year Awards at the 2012 North Country Trail Association Awards Ceremony in August and is more than deserving an American Trails Trail Worker Award for the state of Michigan for him many years of service to both the Spirit of the Woods and the Grand Traverse Hiking Club of the North Country Trail Association. His dedicated trail work from June 2010 through September 2012 in the same spirit and manner as from his initial joining of the Association.