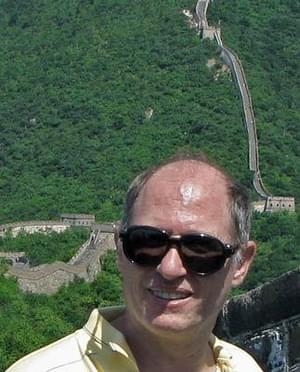 Wayne Feiden at the Great Wall of China

Wayne is the planning director for the city of Northampton in western Massachusetts.

He has led that city to get the highest “Commonwealth Capital” score for four of the five years that Massachusetts has been scoring municipal sustainability efforts.

Wayne has been instrumental in transforming isolated rail trails into a rail trail network, with its hub in downtown Northampton. After a decade of work, the network now connects four downtown and commercial hubs in the city with four other communities and provides easy access for 65% of Northampton’s population. Wayne has begun the planning for the next decade of work, which will provide links to two additional abutting communities and provide easy access to an additional 10% of Northampton’s population.

Wayne also serves as an adjunct faculty at the University of Massachusetts and Westfield State College. Wayne’s publications include three American Planning Association’s Planning Advisory Service Reports and other peer-reviewed and research papers. His work for the APA on Assessing Local Government Sustainability is in process. Wayne has participated on twelve American Institute of Architects Sustainable Design Assessment Teams. Wayne has BS in Natural Resources from the University of Michigan and a Masters in Regional Planning from the University of North Carolina. His Eisenhower Fellowship to Hungary and Fulbright Scholarship to South Africa both focused on sustainability. Wayne was inducted into the AICP College of Fellows in 2008.