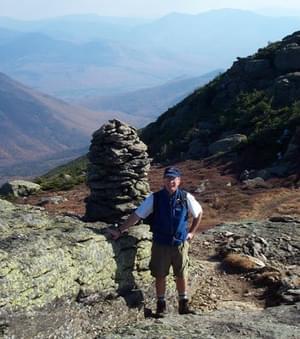 Scott Monroe is retiring this year from the Appalachian Mountain Club’s Alpine Stewardship Volunteer Program. While it is understandable on Scott’s part, it will nevertheless be a major loss to the ASV Program.

Fortunately, Scott will be staying on in another AMC volunteer capacity, the Adopt-A-Trail program. When he retires from the AAT program in 2 years, we will suffer yet another serious loss and that is because Scott helped to build both of these programs into what they are; he advocated for them – often when no one else would – and he supported and lead both of these programs for years. Scott deserves the Lifetime Service Award because of his tireless work and clear passion for the trails of the White Mountains.

Guy and Laura Waterman, authors of the books Forest & Crag, unofficially started the ASV Program in the early 1980s on Franconia Ridge in the White Mountains. Due to their personal connection to the beautiful and rare alpine zone, they advocated for minimizing impacts of hikers and restoring the fragile area. This was no easy task since Franconia Ridge is home to the ever-popular Appalachian Trail, and to get to this ridge is only a short day hike from highway I-93 – a major artery into the North Country from Boston in the south and Quebec in the north. With such limited alpine areas in the eastern United States, and such easy access for countless visitors, this area is heavily traveled and in need of constant stewardship and protection.

The Waterman’s continued to push for stringent protection of Franconia Ridge and actively engaged their friends in the push as well, including their friend Scott Monroe. After Guy passed away and Laura curtailed her activities on the ridge, Scott took over the reigns’ of caring for the alpine zone. One of his first actions was to earn recognition and support for what would become the ASV program. Scott, as the primary proponent among many supporters of this program, went to the AMC Annual Meeting in 2000 to promote the establishment of the program. At first, the AMC was skeptical because they did not want random volunteers approaching members of the public and potentially lecturing them about the need to stay on trails. Scott persisted, and after deliberation, the AMC trails department backed a select few volunteers – those who would be excellent stewards, as well as excellent at outreach – to start the ASV Program.

Twelve years later, the AMC, USFS, and the Appalachian Trail Conservancy now jointly sponsor the ASV Program. It has expanded to the summit of Mt. Washington, home of the Auto-Road that takes people in their cars right to the top of the tallest mountain in New Hampshire, and the location of the greatest amount of alpine vegetation in the east. Scott, along with the other 19 active stewards continued their immensely valuable efforts of hiking the alpine trails, repairing cairns to guide hikers, knocking down illegal cairns, recording alpine vegetation growth data, and offering assistance, including first aid assistance, to any hikers in need. 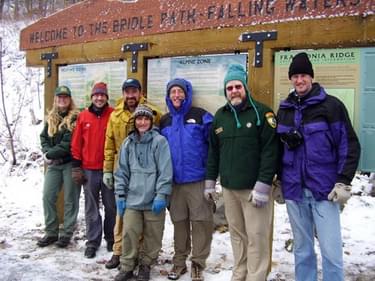 As if that were not enough, since the 1980s, Scott has been a member and leader of our immensely successful Adopt-A-Trail program. The AAT program continues to grow; this past year we had 222 volunteers contribute 4,500 hours of service on the trails of the White Mountain National Forest. Each of them is the official adopter of a section of trail in the White’s from a half mile to four miles in length, and it is their responsibility to perform basic maintenance on the trails.

Scott and his wife Barbara lead the Mt. Washington Region – our busiest region because it contains the summit of Mt. Washington – and the Carter Region of our AAT program. Scott, along with Barbara, has proven to be the most reliable Region Leader in the program, always completing the necessary reporting, and developing new reporting methods that have proven to be most helpful in planning projects with the Forest Service. More importantly than the paperwork, Scott continues to get out in the field, check on the trails in his regions, offer feedback on trail conditions to his adopters, and encourage other volunteers to take on greater responsibilities within the program. In my short time here, the Monroe’s are already responsible for recruiting two new Region Leaders, something for which I am personally grateful.

I am coming on to the volunteer trails program near the end of Scott’s time as an active volunteer, so I in fact missed his most active days. As an organization that was originally just a club of volunteers, the AMC takes its relationship with our current club leaders very seriously. We have volunteer club-wide committee chairs that are responsible for a variety of aspects related to AMC, including outdoor recreation, environmental education, and trail stewardship.

For three years in the 2000s, Scott was the very influential club-wide committee chair for the Trails Committee. During his time as committee chair, he helped steer AMC policy as it regarded trail efforts throughout AMC’s region of operation, from Maine down to Washington D.C. He helped develop leadership standards for volunteer trail leaders, identify pressing trail work needs, allocate funds to deserving trail projects, and work with our countless partners to ensure productivity on trail projects big and small. During his time as Trails Committee Chair, he also literally wrote the book on the Alpine Steward Volunteer Program, compiling the extensive handbook for stewards containing the background of the program, the flora of the alpine area, Leave No Trace ethics, First Aid practices, and even the principles of interpretation.

Scott Monroe is a vital member of our volunteer community and we are lucky to have him in just one of our programs for two more years, and I am not the only one to feel that way.

Craig Repasz, another Alpine Steward and AAT Volunteer recruited by Scott had this to say:

I had completed hiking the Four Thousand Footers list and felt that it was time to give back to the trails I had enjoyed. I volunteered to be a trail adopter and Scott Monroe was there to instruct at my Alpine Skills training session. He and his wife Barbara were very enthusiastic, dedicated instructors. Since then our trails have crossed many times. After a few years, Scott became my trail supervisor. He encouraged me to become an Alpine Steward. Once again, Scott was there for my initiation and training. Scott seems to spend most of his weekends in the White Mountains not for his own indulgence and pleasure but to work to maintain our trails and our mountain environment. He is either working on his own trail our joining forces with another trail adopter to assist and train them. He makes himself available to address any question or concerns I might have. He is even-tempered and steady. He exemplifies the strong, hardworking, soft powered, dedicated AMC volunteer in the Trails Department. I look forward to working with him and his wife Barbara for many years to come.