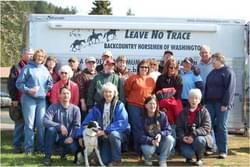 Backcountry Horsemen volunteers with the Leave No Trace Trailer

Long focused on backcountry travel, the program’s scope has been expanded to cover day-use areas and trails.

The Back Country Horsemen of Washington (BCHW) is a statewide organization that performs volunteer work on trails throughout Washington State. Last year, BCHW members completed nearly 70,000 hours of service. They worked closely with public agencies on responsible use of trails by equestrians. BCHW provides conservation education to riders, instilling a strong sense of ethical stewardship. They partner with many other recreation and conservation organizations, including the Washington Trails Association and the Wilderness Society.

In addition to trail and infrastructure work, BCHW invests in the education of trail-riding equestrians and pack stock users in adhering to the minimum-impact principles as exemplified by the BCHW Leave No Trace program. This program has long been a hallmark function of the organization— the continual reaffirmation of the importance of leaving the land as you find it. To do this, BCHW constantly reassesses available science and best management practices and adapts them to stock use.

The Recreational Trails Program has been instrumental in providing funding for expanding the BCHW Leave No Trace outreach program. BCHW trainers and volunteers hold workshops and staff information booths throughout the year. 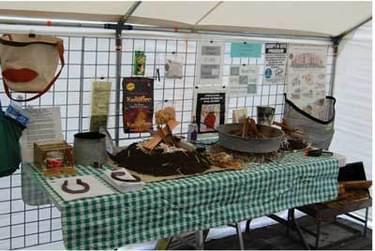 A 2008-2009 RTP education grant enabled the printing of new brochures as well as the production of a video for increasing awareness of ecologic stewardship by public land recreational users, and for increasing the safety of both stock users and non-equestrian recreationists when working or moving around pack and saddle stock.

Long focused on backcountry travel, the program’s scope has been expanded to cover day-use areas and trails. This expansion is vitally important as population centers are growing, with more of the recreating public experiencing the outdoors closer to home, putting more demands on the front-country environment. Workshops teaching minimum-impact ethics are a great way to familiarize youth with the outdoors in a hands-on setting with strong messages about responsible behavior.