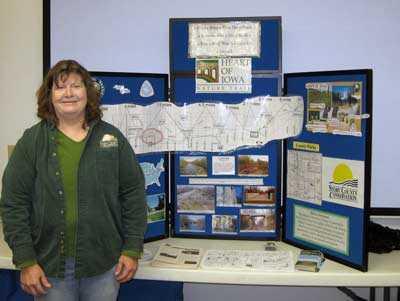 Carol Williams has worked for Story County Conservation since 1986, serving first as an assistant ranger and currently serves as the conservation board’s Special Projects Ranger.

One of her primary special projects has been the Heart of Iowa Nature Trail since work began on the project in 1990. Carol has a strong interest in trail use and is a dedicate bicycler. She has reached out to many trail user groups such as bicyclers, hikers, equestrians, paddlers, and snowmobilers, and built a strong support network through the conservation board’s Trails Advisory Committee. Through Carol’s direction, this mixed group of trail enthusiasts meets monthly to report on trail conditions and plan volunteer projects to improve and maintain the county’s many hiking, paddling, and multiuse trails.

For the last 20 years there has been a section in the middle of the Heart of Iowa Nature Trail that has not been completed. In 2007 Carol tackled the task of linking the two ends of this trail together. This section of trail has posed one of the biggest obstacles to completion due to the need to replace two bridges that were torn down when the railroad bed, upon which the trail rests, was abandoned. The largest was the Skunk River Bridge, a 400’ span with four piers left from the 1913 Milwaukee Road high trestle. The next is the Union Pacific Railroad overpass bridge which is 35’ across. It was hoped that the 1913 river bridge and the U.P. railroad abutments could be reused.

This project combines development phases 7 and 8 of the Heart of Iowa Nature Trail into a single project. Each was supported by its own federal grant. Phase 7 was projected to cost $659,000 in the original Federal Transportation Enhancement grant and was to have built the two bridges. Phase 8 was to have constructed nearly four miles of trail crossing the two bridges and was to have cost $1.037 million in the successful Federal Recreation Trails grant. Both projects were ultimately approved at the same time and were combined for bidding purposes to reduce costs.

Once construction actually began however, it was determined that concrete repairs were going to be far more extensive than anticipated when the original grants were written. Through Carol’s perseverance in working with the bridge engineers, they were able to salvage the RR bridge abutments with extensive repairs, but the addition of two new abutments into the river bridge added to the cost considerably. Concrete repairs to the four piers and replacing the abutments at the river far more than doubled the cost anticipated to build the bridges when the original grant was written.

Carol never gave up hope and continued to work through complicated funding issues with the Iowa DOT that administers all of the grants that were used. The increased costs required Carol to again write an additional State Recreation Trails Grant and another Federal Transportation Enhancement grant in addition to securing additional private funding. Total project cost at completion had increased from the original estimate of approximately $1.6 million to $2.4 million.

The completed new bridges are 12’ wide, but the 400’ river bridge includes a “bump-out” over pier 2 that is wider to allow trail users to pull off to the side and enjoy the view or get out of the way of a passing horse or even emergency vehicle.

Over the years Carol has served as the lead grant writer and has been instrumental in securing several million dollars in trail development grants from the private sources, the State of Iowa, and federal sources. She serves as the board’s primary liaison to the various trail user groups and also serves as the board’s primary on-site inspector during construction phases of the trails.

This portion of the Heart of Iowa Nature Trail is by far the largest project ever undertaken by the Story County Conservation Board. There is little doubt that Carol Williams was the driving force in completion of this important section of the trail. We can think of no one finer to receive the American Trails Association’s 2010 Trails Public Service Award than Carol Williams.