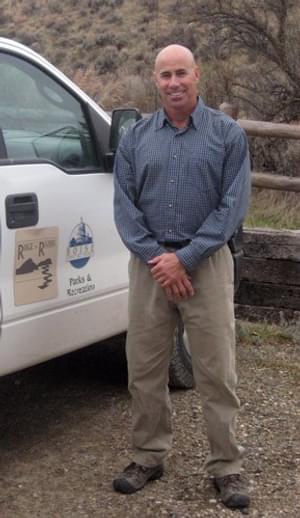 David Gordon has the responsibility as the Ridge to Rivers Coordinator to oversee 140 miles of trails (with an additional 7 planned for spring 2013).

The Ridge to Rivers trail system has grown 60 miles in the 8 years that David has been Coordinator while his budget and staff have shrunk over that same time period. In this role he works with state, federal and local agencies to communicate the management needs of the system and the desires of the recreating public.

He does an excellent job working with a tight budget that is dependent on the political whims of the varying agencies and a few grants from year to year. He is in constant communication with varying trail groups, responds promptly to a many public inquiries about the trail system weekly, hikes and bikes the trails daily to stay current on conditions and works alongside his foremen on designing and cutting new trail.

David manages a crew of 1.5 full-time trail maintenance foremen, a few seasonal employees (depending on trail building grants from year to year), a part-time educational ranger and 12 part-time volunteer educational rangers. His work extends into the evening and weekend often due to public meetings, updating a trail conditions report daily and execution of volunteer projects. He is easy to approach and humble when dealing with the public and the media. He does not shy away from controversy when it comes to wise natural resource management and safety issues on the trails.

David does an excellent job staying on top of all his to-dos all while keeping a positive attitude. As David's manager, I never have to remind him a second time to follow-up on a request. He makes an effort to keep current on trail management issues by attending an annual trail-related conference, visiting trails in areas of high recreation and networking with other trail professionals in the country.

In 2011, David and the Ridge to Rivers trail crew built new trails to Stack Rock (a 1320 acre parcel Boise purchased with Foothills Serial Levy Funds) that required them to pack tools in on their mountain bikes and ride several miles to the trail construction site. This project lasted a month. The response to this new trail has been phenomenal. He also instituted a voluntarily trail closure on numerous trails in the "muddy season." His efforts were a tremendous success because he worked with user groups, user blogs, and the several media sources simultaneously (newspaper, radio, TV, R2R website). During the mild winter of 2012 he started a "Boise Foothills Trail Conditions" Facebook website that has almost 2000 followers. 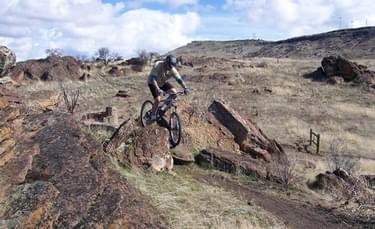 The Ridge to Rivers Trail system is by far the most heavily used trail system in the state. Trail users surveys conducted the last couple years estimate 1500 people are out on the trails every day during two-thirds of the year when the trails are dry. It was created by an MOU in 1992. The current partner agencies are Idaho Department of Fish and Game, Ada County, BLM, USFS and City of Boise. Trails cross lands owned by each of the partner agencies, as well as Idaho State Historical Society lands and private lands (via revocable and permanent trail easements). The system has received accolades in various publications such as Bike, Outside and National Geographic Adventure.

Most recently David obtained a $65k trail construction grant from Idaho Department of Parks and Recreation. He initially applied for the funds in 2011, but was denied due to not having a strong enough matching fund ratio and not bringing new partners to the project. After not being awarded the grant funds, he approached local bike and running shops to contribute to this effort. In the end he had $35k in matching funds for the seven-mile Around the Mountain Trail is scheduled.

Prior to coming to Boise, David created and managed the trails in the Sawtooth National Recreation Area (SNRA) in central Idaho for 12 years. A few years ago when wildfire swept through the SNRA, the US Forest Service hired David on as a contractor on weekends to recreate the trail system that had been destroyed by the fire. On several occasions he has sat on conference panels to discuss trail etiquette, special event, and increasing trail use numbers. His expertise is why other communities in the West have called him to assist them in assessing how to build a sustainable trail system. We are all fortunate to have such talent in Idaho, working to create more and better recreational experiences for those that use the trails .... hikers, school kids, mountain bikers, horse-back riders, runners, and wildlife watchers. David Gordon is 47 and graduated from University of Idaho with a Bachelor's in Wildland Recreational Management.