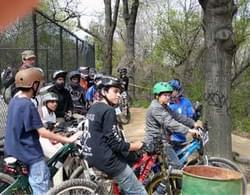 Inner-city kids have benefited most from the trails

A 2005 RTP award was utilized to create bicycle trails at Highbridge Park in New York City, marking the first time that bicycles have been allowed in New York City parks since 1991. The project was completed in 2007. The standards recommended by the International Mountain Bicycling Association (IMBA) convinced the City's Department of Parks and Recreation that professionally designed mountain bike trails could be built and maintained in New York City parks.

Highbridge Park was chosen as it was seen as underused for recreation and had long been a draw for illegal activities. At the same time, the recreational needs of the neighborhood youth were being underserved, increasing their long-term health risks and the costs for the city. Concerned Long Island Mountain Bicyclists (CLIMB) decided to not only focus on mountain bike trails, but also on BMX facilities, to increase the community’s connectivity to the park. 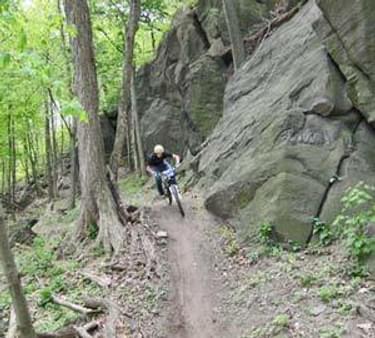 Trail along the rock face

The result has been a resounding success. Since the construction began on the trails, some 1,200 hypodermic needles and truckloads of trash have been removed, neighborhood children have been enlisted as park caretakers, trail design has protected sensitive areas, and work parties have removed invasive species.

Most of the trail work was done by the Green Apple Corps along with the many volunteers who made it all possible. Supervising the youth workers and volunteers was Michael Vitti, President of CLIMB. Green Apple Corps is a division of AmeriCorps that works in New York City parks exclusively.