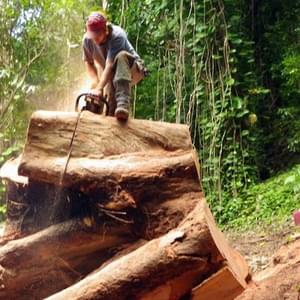 Fred is relatively new to the trail world compared to past recipients of the “Trail Worker Award,” but he is well-deserving of this nomination.

Fred has been the Field Technician for Na Ala Hele Trails and Access Program for the last five years. He is in charge of the maintenance of 43 trails and access roads on Oahu.

But Fred’s talents were discovered in an unlikely place by Oahu’s State trail specialist who navigated the maze-like cubicles of the University of Hawaii’s art department to find Fred late at night welding away on his latest piece. Other art major’s were constantly asking Fred’s opinion or assistance on their own projects, which he was always willing to give.

His creativity, eye for aesthetics, and “all or nothing” work ethic made him a perfect fit as the State Trail Technician.

Basically, a trail technician needs to be an outdoor version of McGuiver because no matter how prepared a crew is for trail work there’s always some hiccup that requires a tool not present at the site. For some this could ruin a whole day’s worth of work, but not for Fred. No matter what the challenge, he is always able to get the job done even if it’s with the wrong tool. He has been the creative genius behind various gravel-moving and rock breaking projects and does not shy away from getting down in the mud. He consistently comes back from the field covered in dirt and vegetation, smelling not so sweet.

These qualities qualified him to be part of a small crew working in one of the most dangerous sections of the Kalalau Trail on the Na Pali Coast of Kauai. He successfully widened and created new trail on the cliff section that posed a constant hazard to the hundreds of hikers every year. 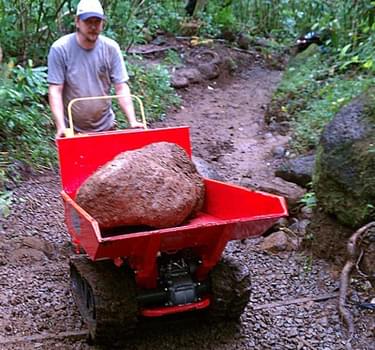 Oahu Na Ala Hele is unique to other trail program’s because they use an inmate workline for their trail crew. This has proven cost-effective for the program and rewarding for the inmates. Fred is in charge of the workload and daily operations of the workline. Under the supervision of Fred, the inmate crew has allowed the program to accomplish projects that would otherwise be impossible.

Some of these accomplishments include moving over 400 Tons of gravel in order to harden high-use trails, pulling 5 ton boulders out of the trail corridor and breaking them into rock steps (basalt rock not granite), keeping constant vigilance on safety hazards including the removal downed trees and landslides, and the creation of 5 more trails and access roads to the program’s trail inventory.

Fred realizes the importance of trails to the public and takes every opportunity to take out volunteers. He assisted with several Eagle Scout projects and led trips with the Sierra Club, Hawaii Trail and Mountain Club, and other community organizations to continue improving the trails. He created a Na Ala Hele Facebook page in order to connect with the community on a larger scale and post the daily accomplishments and important trail information.

Fred has a long career in trail building and maintenance ahead of him and has been an asset to Oahu trails. For the reasons above we nominate Fredrick Bannan for the “Trail Worker Award.”