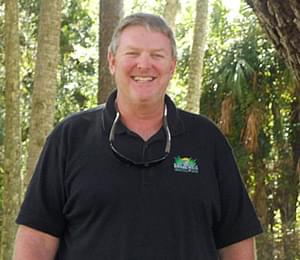 Mickey Thomason has been a leading trails advocate in Florida for more than 20 years.

Mickey has worked tirelessly to manage and advocate for the CFG and his trails career includes many accomplishments. He has presided over the establishment of many new trails and recreational areas to advance the CFG, and he was instrumental in helping to elevate the CFG’s Santos Mountain Bike Trails to world-class status. Beyond the CFG, he has also played key roles and influenced the acquisition, design, development and management of facilities and projects along the Withlacoochee, Van Fleet, Nature Coast, and Palatka to Lake Butler State Trails. Beyond his work on specific projects.

Mickey has also affected significant, long-range positive change in public policy to benefit the Florida Greenways and Trails System by establishing and promoting the CFG as a model linear conservation and recreation area. He is highly respected among many elected officials in the region for his efforts to promote the CFG and trails as a critical eco-tourism and conservation assets to the region. He has also assisted in the establishment of policies and programs that help guide local communities in planning multi-modal, healthy and environmentally friendly, even beyond the boundaries of the CFG. He works with the CFG’s countless adjacent landowners to determine the appropriate means of protection and public access. Specifically, he has worked with adjacent developments to provide central access points that offer homeowners the ability to reach the CFG’s extensive network of trails from the doorsteps of their homes.

Critically, he works with and balances the needs of a broad range of trail interests including the Florida Trail Association, the Ocala Mountain Bike Association, and the Greenway Equestrians. As part of his many responsibilities, he also serves on the Ocala-Marion County Transportation Planning Organization (TPO) Technical Advisory Committee (TAC) and on the Alachua County Wild Spaces and Public Places Citizen’s Oversight Committee.

He personally enjoys mountain biking and is a strong proponent of bicycling as an alternative transportation form and a healthy, active recreational activity. At work and at play, Mickey takes every opportunity to not only further the development of trails, but also helps to educate the public about their importance, and how they not only benefit health, but the environment and the economy as well. He stays keenly aware of and personally involved in the long range planning efforts that raise both the visibility and viability of trails. Mickey Thomason is an advocate who is truly worthy of recognition for his contributions to trails and the Florida Greenways and Trails System.