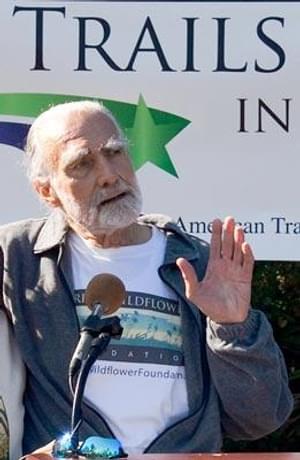 Herb Hiller has been a leading trails and bicycling advocate in Florida for decades.

Herb currently serves as Southeast Program Consultant for the East Coast Greenway. He is also Vice President of the Florida Greenways and Trails Foundation. His long time advocacy has been instrumental in establishing Florida’s bicycling, trails and trail tourism efforts. In the last two years, he has led and laid the groundwork for important steps to broaden the support of policymakers, planners and the public regarding trails and their benefits.

Herb is the driving force behind one of the most exciting projects currently developing in the realm of Florida trails. In August 2009, Herb organized a meeting with leadership at VISIT FLORIDA (VF), the Sunshine State’s official tourism marketing corporation. VF is responsible for promoting one of the most popular visitor destinations in the world with one of the largest tourism economies -- an estimated $65 billion was spent by Sunshine State visitors in 2008. VF had previously partnered with the Florida Department of Environmental Protection Office of Greenways & Trails (OGT) and other organizations to develop four very popular trail brochures. The goal of the August meeting was to emphasize the growing importance of trails in Florida tourism, with the hope that VF would place increased focus on trails in its marketing, particularly on its website. The meeting was a watershed moment. VF leadership more than embraced the idea of expanding its trails marketing. They committed to “do what [they’ve] done for golf” and establish a full-feature, dedicated section on the highly popular VF website for trails. Since that initial meeting less than a year ago, incredible progress has been made. Herb has led the team, which includes VF and OGT, to the actual launch of the new trails and tourism website.

From an advocacy perspective, Herb is ensuring that this critical moment for Florida trails is fully seized. He is working tirelessly to get the project launch before a broad and diverse audience. He is placing the new website in the context of the “greening” of Florida tourism, and is leading the effort to bring it into the realm of policy and planning. He is driven by the insight that as local communities see the tourism draw of trails, with VISIT FLORIDA leading the way in marketing, they will not only want to market trails but will be anxious to build them. Herb fittingly suggests that this is where tourism will drive the trails movement itself. It is this breadth of vision that makes him such a critical advocate for Florida trails.

Trails and the Green Workshop:

Herb was instrumental in organizing a workshop (Central Florida in November, 2009) focused on trails and their economic benefits and impacts to Florida. The workshop provided a much-needed forum for elected officials, planners, users and advocates to hear about and discuss the economic side of investing in trails. Among the topics covered at the workshop were national and state trail trends, trail based tourism, and the economic impact of trails on towns and communities. This workshop was the catalyst for a subsequent meeting of the regional greenways and trails working group to focus further on the topic, and it has led to a joint agency project to conduct a trail economic impact analysis study in the region which is currently in development. The results of this study will help to convey the message to decision-makers regarding the economic benefits of investing in trails.

Resolution of the Florida Greenways and Trails Council:

In the wake of VISIT FLORIDA’s renewed commitment to trails, Herb was seeking an appropriate mechanism to more fully bring the economic benefits of trails before policymakers at the state level. His continued efforts ultimately led to the development and unanimous support of a first-time resolution by the Florida Greenways and Trails Council declaring the importance of trails and greenways to Florida’s economy. Among the resolution’s many provisions were state and national statistics, case examples of trails in tourism, and information about public demand for trails. The resolution was signed in February, 2010, just prior to Florida’s state legislative session, to be at the ready of advocates promoting Florida’s trails.

Herb is currently organizing an important half-day session to take place as part of the September, 2010 St. Johns River Summit in Florida’s First Coast region. This venue will put trails before many important policymakers and planners who are interested in the preservation – environmentally and economically – of this nationally designated eco-heritage river corridor. This is yet another opportunity that Herb is facilitating to heighten the stature and visibility of trails among Florida leaders.

The advocacy of Herb Hiller has been crucial in advancing the trails movement in Florida for many years. The above are just a sampling of his recent efforts, all of which have taken place in the shadow of a struggling state economy. In times of economic challenge, many are constrained in creative ideas and visionary thinking. Herb is the opposite. His enthusiasm and advocacy is unimpeded and even emboldened by the inherent obstacles of limited funds and narrowing programs. More than ever, he leads by recognizing and conveying in a compelling manner the important role that trails can play in the Sunshine State’s economy and environment.