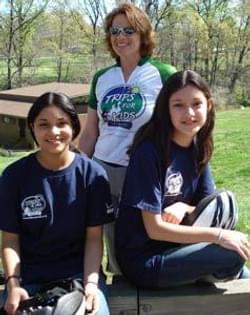 Julie Childers isn’t shy, nor is she quiet about her love for trails; first as a hiker, trail runner, then as a mountain biker and now as a mother.

The trails provide her peace of mind, tranquility and a great resource for exercise in nature’s beauty. Her husband Pat shares her enthusiasm and her gift of gab. As the founders of Trips for Kids (TFK) Metro DC,they have dedicated the last 6 years of their lives to sharing this love with the children of their community and the world at large.

In doing so they created an organization that has introduced over a thousand children to trails in the Washington DC area. It was this effort that put Julie and Pat in front of the media as spokespersons for children’s health, mountain biking and trails in the DC Metropolitan area and beyond. 2007 provided TFK Metro DC more than its 15 minutes of fame for trail support and the Childers made the most of it. In addition to the half dozen articles penned by the Childers themselves for local bicycling magazines such as Spokes and Pedal Patter, their message about the critical need of getting children into the environment and on trails was featured in local newspapers and radio. The Centerville Times ran an article on their efforts with at-risk youth and quoted Pat Childers as stating. "Yesterday, they got an enjoyable bike ride on a beautiful trail. That trail was not just made overnight, it took a lot of hard work. Today they're creating some of that hard work. They're hot and tired, but they're creating something that will live on for years of future use."