American Trails presents the National & International Trails Awards Program to recognize the tremendous contributions of volunteers, professionals, and other leaders who are working for the betterment of trails both nationally and internationally in both rural and urban settings. American Trails honors the contributions of leaders who are working for the advancement of trails across the country and around the world. 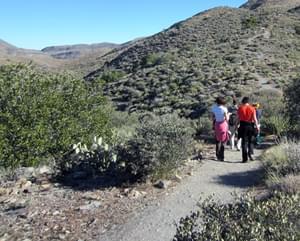 Hiking in the community's part of the Sonoran Desert

The community is planned for 2,426 residential units. Currently there are approximately 1,657 completed residences, with an additional 108 residences either in design, remodel, or under construction. 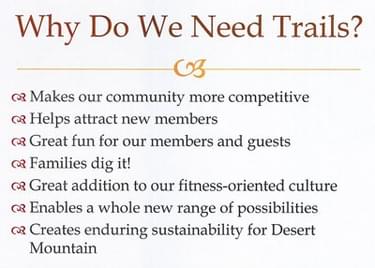 The committee hired Okanogan Trail Construction to first study, and then construct, a multi-use trail system that would appeal to the broadest spectrum of potential trail users of varying abilities. This 3,000-acre natural preserve and the desert wilderness trail system within it – the Desert Mountain Trails – is the subject of the American Trails Developer Award nomination.

The Desert Mountain Trails Master Plan is a "stacked loop" trail system. By design, trails emanate from and return to a single trailhead. Fully built, the system will include more than 14 miles of trails. Currently, Okanogan Trail Construction has completed three wilderness trails – the Sunset Summit Trail, the China Wall Trail, and The Hohokam Camp Trail – for a total of 6.6 miles.

The Sunset Summit Trail represents the trail Master Plan's spine from which most of the trails originate. For the first mile, the Sunset Summit Trail is built upon a reclaimed two-track road once used for cattle ranching. The balance of the trail features a multi-use, four-foot tread width that climbs a small summit to a beautiful panoramic overlook. Breathtaking views include Quien Sabe Mesa, Skull Mesa, New River Mesa, and Gavilan Peak in the foreground, with distant silhouettes of the Harquahala, White Tank, Sheep, Heiroglyphic, and Bradshaw Mountains on the western horizon. Departing the summit, the trail makes a looping traverse and descent back to the reclaimed two-track road for a total of 2.8 miles. Trail users are walkers, hikers, runners, and mountain bikers. 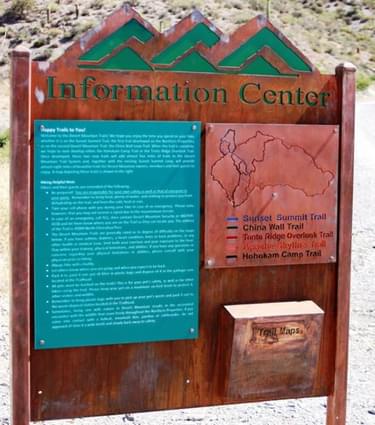 Trailhead information for hikers and bicyclists

The China Wall Trail adds another 1.3 miles. Like the Sunset Summit, it is built to a multi-use, four-foot tread width. However, the China Wall Trail has a steeper gradient that climbs a series of 17 switchbacks and nearly 800 vertical feet to the southern portion of the China Wall, a natural geologic formation that resembles a giant man-made wall. Because of China Wall's steeper grades, most users will be hikers, followed by runners. All but the strongest mountain bikers will find the trail too steep to negotiate. The trail's additional elevation allows the hiker to gaze as far south as the Santa Catalina Mountains just north of Tucson, and southeast to the Superstition and Pinal Mountain ranges.

Desert Mountain commissioned the McMahon Group to conduct a “2012 Membership Survey Board Report.” The survey, among other tasks, obtained input on issues related to future improvements and strategies the community might consider. In terms of community member satisfaction, Desert Mountain Trails are at the top of the highest-ranking amenities. Furthermore, numerous real estate and development publications note increasing trends that today’s buyers desire communities that offer an active outdoor lifestyle, including hiking and biking trails. In Desert Mountain’s onsite sales office, the completed trails are marked on the sales office’s center selling piece: a large three-dimensional and topographically accurate model of the entire 8,000-acre Desert Mountain community. This model is very effective in showcasing the amount of natural area open space within the community, as well as the community's proximity to the Tonto National Forest. 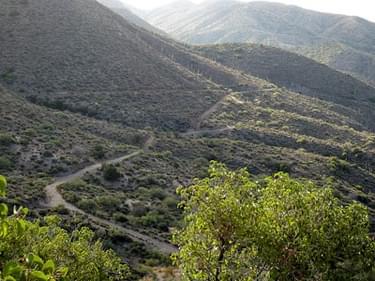 "Humanity, We Have Lift-off”

Troy Gillenwater tells how the trail system provides an escape from the digital world to a walking meditation.

Right now, today, our humanity is rocketing through a transitional epoch perhaps more profound than when mankind evolved from the Stone Age, the Bronze Age, Iron Age, and Industrial Age combined.

We are accelerating ever faster into the Age of Technology’s orbit. Some call it the Age of Interruption. Regardless, our trajectory into this technological frontier is exponential. There’s no turning back now. The mission has launched and it is sure to be an exciting and remarkable journey.

In the past, however, mankind transitioned from one Age and into another in a much slower pace. Men and women’s brains worked pretty much the same way on either side of the transition. The great technological advances of the past were far simpler and less profound.

Not so much anymore.

Welcome personal computers, iPads, Blackberrys, iPhones, Kindles, iPhones and X-Box. Today we email, we text, we Skype, we Tweet, we Facebook, we Google, and we instant- message. Our lives now are harnessed to a flashing digital screen. We find it unsettling to be separated from our technology.

Yet lurking somewhere in the back of our thoughts, we know something vital is changing. Our human neuroplasticity -- now under relentless technological arm-twisting -- is changing not what we think, but how we think.

Today our brains buzz with billions of bits of information arriving instantaneously. Our constant interruptions are interrupted! At the click of a mouse or the flick of a scroll- down menu, we now have more information quite literally at our fingertips than all the information ever acquired since mankind slogged from the primordial swamp. But whatever information we instantly glean from the screen vanishes just as quickly from our short-term memories...precisely because it can. Whatever piece of information we sought, and then lost, we can simply retrieve over and over again. We don’t need to remember much of anything.

Futurists cheer the coming singularity: the moment when our technologic machines match our human intellect and meld us into part-human and part-machine. Yet as we streak toward ever greater, ever faster technology, our species is left with little time for reflection or introspection. Critical thought, contemplation, and deep understanding are human traits left behind in the technological jet blast.

This is why, perhaps subconsciously, many of us return over and over again to the sanctity of our Desert Mountain Northern Properties. Deep within the canyons, on top of the peaks, gravity, like an unseen umbilical cord, bounds us to our humanness. How ironic that of all the endangered species and threatened environments worthy of preservation, our humanity tops the list.

We need to preserve ourselves from ourselves.

The Northern Properties help us do this.

As soon as we leave the trailhead and venture forth into the Northern Properties, we deploy technology’s thrust reversers. Somehow we float slowly back to earth. Silence envelopes us. Our minds empty. We unplug.

Instead of our eyes itching and watering from digital images flashing ceaselessly across backlit computer screens, our eyes rejuvenate when watching the slow pace of monsoon clouds inflating in the east and boiling over the mountain crests.

We can hike for miles and miles without interruption, like a walking meditation. Or, we can ponder the intricacies of the last book we’ve read or contemplate what we wish to write in the next letter to a close friend.

On the trail, disconnected from technology, we are self-reliant again. We are not tethered to a power cord and outlet. Without a screen, we make our own decisions and as a result either suffer the consequences or enjoy the benefits. Pushing a button or scrolling through menu options does not help us climb the next ridge. It’s the blood coursing through our veins and arteries, the oxygen in our lungs, the power in our legs that have served us so well through this deep and rich human journey.

For me, the awe-inspiring vistas at every turn remind me of my tiny place in the universe, and how, in the end, technology will never surpass the miracle of simply being alive.

We, as humans, are already on the ride of our lives on this little planet whirring about the galaxy. This realization, as we hike over one pass and into a distant valley, forms a technological antivenin that, at least for a short time, helps preserve our human soul.