This award is given to a partnership which benefits agencies or services within the field of trail planning, design, or implementation. Level One category: a partnership consisting of more than two entities. 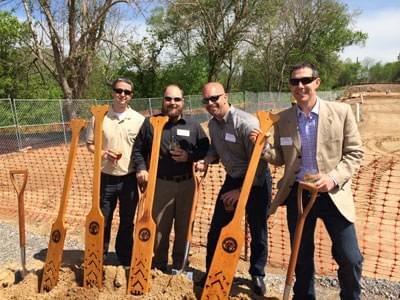 Asheville, North Carolina is emerging as one of the U.S.’s most livable and attractive cities, repeatedly chosen as one of the “Best Towns” and has been voted as “Beer City USA” four years in a row.

Asheville is achieving these accolades because of innovative public-private and non-profit partnerships that are working to build public infrastructure, attract business, and become a model city for sustainability.

One shining examples of a successful partnership is the New Belgium Section of the French Broad Greenway. The half-mile greenway completes a critical part of a larger planned greenway system, becoming a key artery in the intermodal system that connects many points of the city. The greenway is part of the new and innovative New Belgium Brewery campus in downtown Asheville’s River Arts District.

The partnership that built the greenway

The French Broad/New Belgium Greenway is located in the River Arts District; a transitioning post-industrial landscape being revitalized into one of the East’s most vibrant outdoor recreation/art/and brewery destinations. The site of the future brewery sat underutilized along this riverfront for many years as a brownfield, a visible eyesore from downtown and Interstate 26. In 2012 plans were underway to build the LEED certified brewery on the 18 acre site, showcasing the greenway as a key feature. The brewery will be a major tourist attraction, major employer, and provide long awaited riverfront access and off-road bike/pedestrian connections. These factors and especially the greenway helped sell the project to the public. 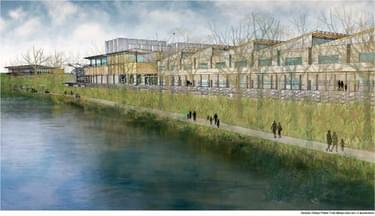 The City of Asheville, Buncombe County, and the Economic Development Coalition for Asheville-Buncombe County (EDC) were critical partners to seeing the New Belgium Brewery and the greenway to fruition. Tax incentives were a tool used to court New Belgium, but the City’s plans for improving the River Arts District’s walkability and intermodal infrastructure compelled New Belgium to partner on making infrastructure improvements. Additional partners engaged were Duke Energy who has donated land to ensure a viable connection to the next phase of the greenway and the Municipal Sewer Authority who allowed the greenway to use significant portions of the sewer right-of-way.

Once New Belgium committed to Asheville as their new home, they contributed $50,000 for the development of the Buncombe County Greenway System and money towards connecting bike lanes to the site. Of the $150 million total cost of the New Belgium site, the City is contributing $2.5 million for the greenway and associated amenities, and another $4.25 million for work on the project including integrated stormwater management, street and interchange improvements, and stream restoration. The City and New Belgium utilized one team of consultants to develop a plan for the site and the greenway. Plans were finalized and the City of Asheville designated staff to manage construction of the greenway portion of the site as well as the future trailhead.

The French Broad Greenway is part of a larger greenway system. The New Belgium Brewing site will be connected via a greenway extension to the French Broad River Park, Carrier Park and Hominy Creek Park providing the single longest greenway in Asheville when complete. In the future, this section of the greenway will connect across the river to the Wilma Dykeman Riverway and miles of greenway and multimodal improvements planned for that side of the river. The New Belgium section of the Greenway is critical because of it prominent location in the River Arts District. The new trailhead/ parking area is sorely needed for both the greenway and river access, and it serves as a major piece to the connection to West Asheville, a nearby popular neighborhood and commercial center. One of the greatest features of the greenway is the constant view of the French Broad River, which on any given weekend is chock full of kayakers, canoeists, fishermen, and tubers. 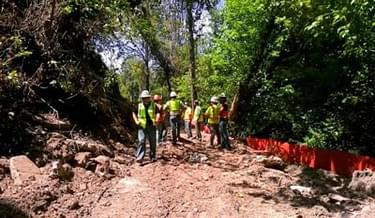 The south end begins at Haywood Road, a major connector to West Asheville, where a new bus shelter will deliver riders to the Brewery and Greenway. Seating and overlook areas along the greenway will have low maintenance high-impact landscape features, including pavers, and trash/recycling receptacles. A major feature intersecting the Greenway is the restoration of a heavily degraded creek flowing as a key feature through the Brewery and feeding into the French Broad River. The greenway crosses a 50-foot bridge spanning over this creek and small “holler" abundantly planted with natives and strewn with rock boulders. A prominent multi-tiered drop pool structure was located below this span providing both visible and audible cues to it's existence. Due to existing conditions, extensive wall systems were utilized along the greenway to minimize impact to the rivers floodway and achieve ADA grades.

The north end of this project will be at the Craven Street Trailhead, a “Cadillac” trailhead for the City. The trailhead will feature a kiosk, bike repair station, sign monumentation, and an ADA picnic table, bike parking, materials salvaged from site and readapted to seating and an art installation. Permeable paving in the trailhead’s parking lot will capture much of the surrounding areas stormwater. Improvements to the trailhead area will provide critical connections to the Craven Street Bridge, one of the few crossing of the French Broad River in the River Arts District.

This innovative partnership is a once in a lifetime opportunity that the City of Asheville, New Belgium, and especially visitors and residents will benefit from for generations. As greenway development in the Southeast continues to explode, the partnership and project will continue to serve as a model for other like-minded cites.