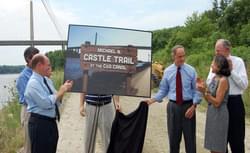 Construction of a 14.5-mile recreation trail in Delaware and Maryland along the Chesapeake and Delaware Canal owned and operated by the U.S. Army Corps of Engineers.

Recreational Trails Program funding was initially used for planning of the trail in 2009 with two Public Lands Highway Discretionary grant awards used in both states for design and construction the trail to convert an USACE service road on the north side of the C&D Canal into a multi-purpose recreation trail with associated amenities (trail heads, rest room facilities, security, and signs).

The new multi-purpose recreational trail has created a safer recreational area and new modal connection for the growing communities of Delaware City and Middletown, DE, and Chesapeake City, MD by transforming an unpaved canal maintenance trail into a premier destination for hikers, runners, walkers, cyclists, fishing, and equestrian enthusiasts. 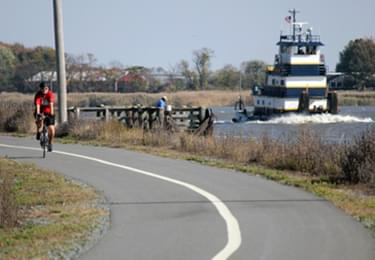 Canal traffic along the Waterfront Trail

The 1.8 mile trail in Maryland (Ben Cardin Trail) was dedicated 2016 in Chesapeake City and the first phase of the 12.7 mile trail in Delaware (Mike Castle Trail) was opened in in 2013 and completed entirely in fall 2016.

The trails in Delaware are part of the Governor Markell’s First State Trails and Pathways Initiative that expands a statewide network of new and enhanced trails and pathways for walking, biking, hiking and active living. Delaware's trails promote the growth of the recreation and tourism industries, enable people to connect with the outdoors and improve the quality of life for all. 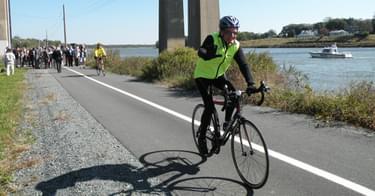 Bicyclist's on the paved Canal Trail

Mike Castle deserves special mention because, while serving as Delaware’s Member of Congress, he helped initiate the Canal Trail project in 2004, when constituents came to him with ideas about better ways to use the area around the canal. His vision and support were essential to the creation of this wonderful resource.

"The opening of the recreational trails along the C&D Canal marks another great milestone in expanding Delaware's trail network of more than 571 miles of trails," said Governor Markell. "Building the trails linking two historic cities was a tremendous collaboration among state, federal and city partners.

"With the trails now completed, more residents and visitors will be drawn to the wonderful amenities that Delaware City and Chesapeake City have to offer, expanding tourism and boosting the local economies. As a cyclist, the Michael Castle Trail with its natural, scenic beauty along the C&D Canal is one of my favorite trails to ride." 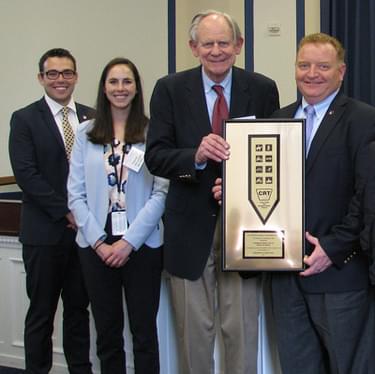 "This project has had 360 degrees of support— receiving funding on the federal, state and local level," said U.S. Senator Tom Carper. "The trail provides a great opportunity for anyone to walk, run, bike, bird-watch, fish, and ride horseback in a scenic area. As our nation's health care costs rise, projects like these that support healthy lifestyle choices are increasingly important."

"This is an exciting time for cyclists, walkers, joggers, and anyone who enjoys the outdoors," said U.S. Senator Chris Coons. "Completing the trail on the north side of the C&D Canal has been a terrific group effort of federal, state and local agencies. I am delighted that the completed Castle and Cardin Trails will attract more visitors and encourage more families to get outdoors and enjoy this resource that connects two great small towns, Delaware City and Chesapeake City."

"I am proud of the legacy we are leaving to the residents of Maryland, Delaware and the region. We want people to enjoy their communities and feel connected to the outdoors and to others," said Maryland U.S. Senator Ben Cardin. This project will allow people to gain a greater appreciation of the history and future of this region, while also staying healthy. It is also an important economic driver, helping the small businesses in towns along the trail attract tourism dollars and thrive."