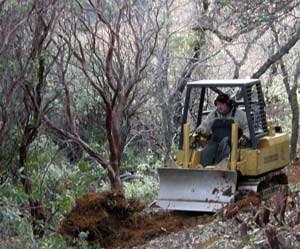 Brent Owens and Kimberly Hawkins are principals in the philanthropic Redding Foundation, and have been volunteering for the Bureau of Land Management (BLM) the last two years.

Brent and Kimberly have been energetic volunteers and philanthropists, lending their time and expertise in the surveying, designing and building multiple-use recreation trails, primarily on BLM-managed public lands in Shasta County.

Working quietly and "behind the scenes" they have contributed approximately $100,000 of their own funds and donated time and services valued at more than $200,000 in these endeavors. They have each contributed more than 1,000 hours of their time during this period. Brent, a former city planner and developer for over 30 years has applied his knowledge and experience in planning and engineering in building non-motorized trail systems in the Redding area. Kim Hawkins has assisted Brent for the past 15 years, focusing largely on coordinating work by volunteers including “hosted workers” from the California Department of Corrections. Without Kim’s management of the hosted workers and volunteers the trail projects would come to a quick stop.