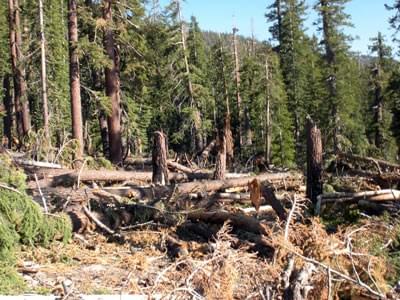 Bill Carter has been on many Backcountry Horsemen’s (BCHC) work parties clearing trails but never on one that was defined as an Epic Event.

The “epic” wind event was in November 2012 where the equivalent of the high altitude jet stream came down to earth into the Inyo Forest surrounding Reds Meadow Pack Station, near Mammoth CA.

Winds were out of the north at 100-120 mph lasting 5-6 hours with gusts that pegged the anemometers atop Mammoth Mountain. Best guess the gusts were in the neighborhood of 160-180 mph. As you might surmise the trees in the forests surrounding Mammoth took a pretty severe hit with blow downs estimated to be in the 10’s of thousands of trees toppled. The burnt still standing trees were unaffected by the wind storm however the fully leaved and evergreens with their large sail areas were pushed down in massive matchstick piles all over the trails.

This massive toppling was the event that set the stage for a coming together of many BCHC units, Friends of the Inyo plus others in what was some of the best that us humans could put together. We all gathered in late June at Reds Meadow Resort and Pack Station. Bobby Tanner, our gracious host, provided camping spots for free as well as gave our equines stalls and provided all the amenities of home such as free showers to the tired and dirty. There were old friends, new friends and a ton of work accomplished. All organized by Bill Carter of Eastern Sierra unit of BCHC.

27 volunteers spent 9 days clearing trails, rebuilding root ball torn up tread and in general rejuvenating a devastated trail system. All told five BCHC units were represented led and organized by Bill Carter. All we volunteers cut over 370 trees on some 30 miles of trails in those 9 days. On a previous work party in early June BCHC sawyers cleared a 2.1 mile section of the Pacific Crest Trail south of over 160 trees.

Near the last day of the 9 day work party Bill Carter called Michael Morse, of the Inyo Forest Ranger district, to report on our project’s status. The report went something like this: “done, done, done…” At the end of Bill’s call, Michael was obviously impressed or maybe a better phrase would be awe struck with what we had accomplished.

That wasn’t the end for Bill. He worked for the remainder of the summer putting the finishing touches on trail after trail near Reds Meadow. Overall at the end of the summer packing season the totals were sent to all of us who helped. The numbers are mind-bogglingly large. 4400 trees were cut on over 340 miles of trails. The best part of all this work was no one and I mean no-one was hurt. This herculean feat was only accomplished through the amazing organizational and lead-by-example of Dr. Bill Carter. Each and every day of all the work parties he was first out of bed, first on the trail and first cutting the fallen off the trail. He was simply amazing!