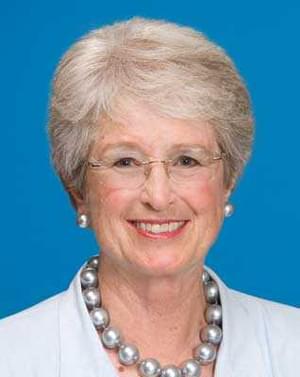 Beverly Lane's inspiration and commitment have been instrumental in the creation and expansion of many regional trails in the San Francisco East Bay.

Her most impressive contribution is the Iron Horse Regional Trail, a paved 30+ mile multi-use trail that serves over one million commuters, schoolchildren, and recreationists each year. According to East Bay Regional Park District General Manger Pat O’Brien, the Iron Horse Trail is one of the great Rail-to-Trail success stories in the nation, thanks to the work of its co-founder, Beverly Lane, who is also a resident and the former mayor of Danville, California.

Beverly’s formal connection with what is now called the Iron Horse Regional Trail began over twenty-five years ago when she served on the Danville City Council. She became a founding member of The Right of Way Trail Advocates, a grass roots organization formed in 1984 to promote establishment of a multi-use trail along the San Ramon Valley portion of the Southern Pacific Railroad right of way, which ran through the heart of the city.

By 1986, the trail included three paved miles north to the small town of Alamo. The group was ambitious, however, and had a long-range plan of extending the trail ten miles south to the town of Dublin and five miles north to the border of Walnut Creek. The trail was almost an instant success as a safe way for kids to commute to schools, parks, and ballfields, and as a pleasant alternative to busy city streets for commuters to bike or walk to work or local shopping centers. With dedication and perseverance, Beverly Lane helped push for the expansion of the trail much further north than its original plan, to the town of Martinez and more recently south to Pleasanton. The present trail, managed by the East Bay Regional Park District, passes through major business parks, peaceful suburban neighborhoods, and near several of the Bay Area Rapid Transit (BART) system’s stations making a convenient connection for commuters from all over.

Her association with the popular Iron Horse Trail was one of the primary reasons she was first elected to the East Bay Regional Park District Board of Directors in 1994, and re-elected in 1998, 2002, and 2006. She has an extensive record of public service and, along with being co-founder of the Iron Horse Trail, is the founding president of both the Danville Association and the Museum of the San Ramon Valley. She has served on the state boards of the League of Women Voters and the League of California Cities. Lane has a BA in history from Occidental College and an MPA from California State University, Hayward. She was a Fellow of the Coro Foundation, the Chamber of Commerce Woman of the Year, Alamo-Danville, Danville Area Chamber of Commerce Citizen of the Year, and the Grand Marshall of the Danville July 4th Parade. For her efforts to promote trails and preserve open space in the East Bay she received the Mountain Star award from Save Mount Diablo in 2005.

In 2008, Beverly Lane worked with staff from the East Bay Regional Park District and BART to organize a one day event encouraging the public to use the BART system to get to the Iron Horse Trail and ride to a local event location. Energizer stations were provided along the way. The event was very successful with families, seniors, teenagers, and elected officials taking part. Many commented that they had never ridden the transit system nor along the trail and were pleasantly surprised about the easy connection from stations to trail.

She is a frequent columnist and has appeared on numerous programs, including KQED’s Best Bay Area Bike Rides, touting the benefits of using the Iron Horse Trail to commute as part of a healthy lifestyle program.

“Thanks to Beverly’s vision, the present-day Iron Horse Trail can be viewed as a guide for creating urban trails,” says O’Brien. “Rather than being a theoretical model, it’s the real thing. Trail planners can come out and take a look and see the benefits of hundreds to thousands of people using the trail each day.”