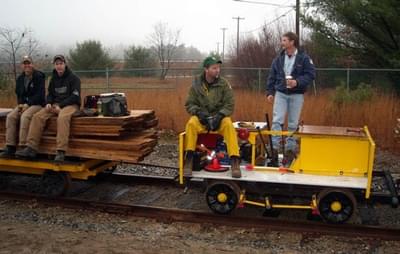 Bruce is the President of the Cotton Valley Rail Trail Club (CVRTC), a group of railroad motorcar enthusiasts that help with trail maintenance on a variety of trails around NH.

The Cotton Valley Trail is a multi-use railroad corridor that still has rails in place for a 12 mile section. This trail was developed in the early 2000’s to include bicycle and hiking access along the grade and includes areas developed along the side of the rail and sections with fill placed between the rails. The CVRTC has been instrumental in assistance on this trail under Bruce’s lead.

Recent trail development projects along other sections of this trail caused some concern among the motorcar enthusiasts and they felt they were being pushed off the trail to make way for other users. Bruce’s dedication to his recreational pursuits and railroad corridor history helped to slow down the development and bring all of the interested groups together to talk about alternative design plans. The final product was a trail that was better for motorcars and all other users of the trail.

Bruce’s passion for the property, understanding of others needs and willingness to talk about solutions that may not be obvious up front has helped shape new design plans for this trail and future phases of development. He is absolutely committed to the motorcar club and works with others to protect their trail access to the few trails they can operate on. According to other sources the Cotton Valley Trail is the only known multi-use trail in the US that allows motorcar use along with traditional trail users.

Bruce has also led the way in helping the snowmobile community on bridge projects on other railroad corridors in NH. There are a number of active railroads that cease operation in winter months and the corridors become snowmobile trails. The Bureau of Trails and local snowmobile clubs have to put material on the bridges to hold snow and with rails in place the bridges cannot be accessed with conventional motor vehicles. Bruce organizes and assists the snowmobile community with motorcar mobilization and operation, which allows the work to be done within days instead of weeks.

And during this past winter Bruce was instrumental in getting Railroad Motorcars added to NH’s statutory list of permitted trail users. The railroad motorcars are railroad maintenance cars that carry 2 to 4 people and travel the rails at about 10 mph. It had been the practice of the Bureau of Trails and Dept of Transportation, Bureau of Rail and Transit, to allow them to use certain sections of railroad corridor for recreational use but they had no formal level of recognition as a trail user. Bruce and other within his organizations testified about their use to several legislative committees and ensured passage of the bill with unanimous support.