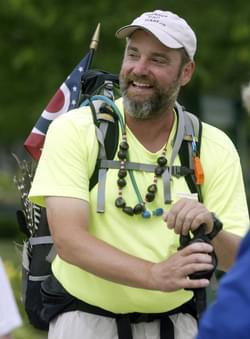 Andy is the chief adventure officer of Outdoor Adventure Connection, and founder and leader of Dayton Hikers, which has more than 3,300 members.

Going by the trail name “Captain Blue,” Andy hikes thousands of miles each year. Andy hiked the entire Appalachian Trail in sections four times, logging more than 9,000 miles and becoming one of fewer than 12 people who have reported completing the trail four times. In 2011, he hiked the 1,444-mile Buckeye Trail, the nation’s longest circular trail that loops around the Buckeye State. Andy is the chief adventure officer of Outdoor Adventure Connection, and founder and leader of Dayton Hikers, which has more than 3,300 members. He has volunteered at Five Rivers MetroParks since 2010. He also chaired the volunteer committee for the 2017 International Trails Symposium held in Dayton. Andy’s trail accomplishments and awards are too many to list. In 2016, Andy sponsored and coordinated the Google Trekker Project in the Dayton area. Andy is a member of the Buckeye Trail Association’s electronic mapping committee. Andy has presented at 46 venues all over Ohio since 2016. Andy is a trail user, trail maintainer, trail advocate, and trail educator throughout Ohio. Andy Niekamp dedicates his entire life to providing opportunities for himself and for others to get exercise, explore nature, live a healthier lifestyle, and make our community a better place to live.