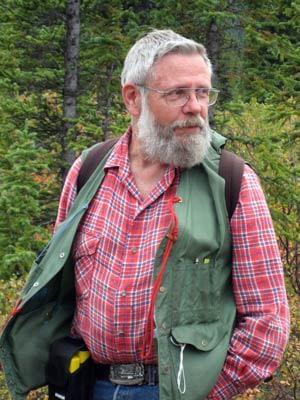 Mike Shields has designed, built and maintained trails throughout the western U.S. and Alaska since 1960, and managed trail systems from 1970 to 1996.

He retired as Chief of Maintenance for Denali National Park in 1996 where he actively supported the development one of the premier trails programs in Alaska. For fifty years Mike cut his teeth in the era of “wooden ships, iron men” and still hasn’t a spot of rust on him. Mike has undertaken a post retirement “career” as the most experienced, dedicated and generous trails consultant within Alaska, and has become an active mentor to the younger budding trail professionals.

Mike is a master trail builder in every sense of the word. He is a layout specialist, bridge expert, blasting specialist, draftsman, illustrator and educator. Since his retirement he has emerged as the “Benevolent Godfather” of the Alaska trails community. Time and time again, Mike is sought out as an “encyclopedia” of trails knowledge, and solicited for a dose of trails wisdom or advice for particularly challenging trails issues. Mike occupies the #1 speed dial spot for many trail professions in the state. He is always generous with his time and thoughtful in his advice. Simply, Mike mentors.

As valuable as those contributions have been, and as deserving of the award as Mike is, this nomination is for actions that clearly demonstrate the depth of character of Mike Shields and his love and commitment to the greater trails community.

Beginning in 2005 Mike Shields was recruited by Alaska Trails, a new statewide trails nonprofit, to participate in the development of a series of trail courses. Like many states, Alaska was struggling to elevate the technical knowledge of sustainable design in a state dominated by adapted, evolved and frankly, poorly designed trails. As could be expected, trails in Alaska were demonstrating significant degradation issues, especially from rapidly expanding summer motorized use which often impacts wetlands and permafrost environments. Mike quickly joined the ranks of other Alaskan trails professional to develop introductory course materials and became a lead instructor. He donated countless hours on material preparation, review, and testing and improving course material and instruction methods. What became quickly evident to Alaska Trails was the depth of Mike’s knowledge and his enthusiasm for transferring his knowledge and mentoring course participants, co-instructors and Alaska Trails staff.

In 2006, Mike was asked if he could transfer some of his expert skills into a series of advanced training modules. Predictably, Mike rose to the occasion and began preparing materials that led to a series of courses and the following supportive documents:

Each of these trail training modules is filled with educating text, illustrative graphics, supporting tables and valuable additional references. They are beautifully written, informative and serve as desk side and packable field references for Mike’s many students. They also serve as the core training materials for Alaska Trails’ advanced courses.

What is truly remarkable about the development of these course materials, which consumed the better part of two winters to produce, is that Mike did not ask to get paid a dime for any of his work. What is so typical of Mike is that he, without hesitation, immediately donated the reproduction rights of the documents to Alaska Trails as a future source of revenue for the organization.