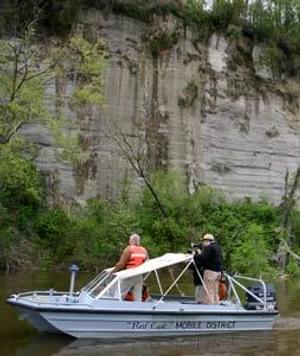 Clark's knowledge of the river, boating in general, and his cooperation with others enabled the Alabama Scenic River Trail to progress from a vision to reality in only 18 months.

Fred Couch initially had the vision of developing the longest water trail in any single state in the nation. He contacted a few key officials and acquaintances, including Thornton Clark of Montgomery, AL. A retired travel agent who has lived aboard a sailboat and has traveled the Atlantic seaboard and many intra-coastal waterways, Thornton also spent nine days of canoeing down the Alabama River with two other teenagers when he was 17 years old.

Thronton researched the history of the rivers and creeks along the proposed trail route. He made recommendations on the route and always had thorough justification backing his proposals. He developed the most thorough collection of GPS coordinates for facilities, campgrounds, and access points that have ever been put together for the region. Thornton attended meetings of trail planners, visited proposed portages, and traveled through Corps of Engineers locks. He worked tirelessly to assist those who were developing guidebooks, brochures, maps, and a website. He also provided leadership in planning the opening ceremony for the Alabama Scenic River Trail on June 6, 2008.